THE EXPLANATION FOR THE "YELLOWSTONE FOSSIL FORESTS:" AN UNCOMPLETED RESEARCH PROJECT

When we do geology research, the accuracy of our conclusions will depend on whether our worldview, or philosophy, is correct. Much experience shows us that geology research that is done carefully, and guided by the information in Genesis has the best chance of reaching reliable conclusions. An early example of this, from the 1970s, was a study of the fossilized forests in Yellowstone National Park. These fossil deposits consist of a series of volcanic layers with numerous tree stumps and logs, one layer above another. Previous researchers concluded that each layer with its trees grew where it is fossilized, was killed by a volcanic eruption, and then another forest grew on top of it. If this were true, the whole sequence would have taken much more time that the biblical account allows. A group of scientists who take the Bible seriously went much deeper in research on the “fossil forests,” and found that the evidence indicates the trees grew somewhere else and were transported by water into the Yellowstone area before they were buried. The eruption of Mount St. Helens provided insights that helped explain how this process worked. This research was well done, but is not completed. It offers opportunity for more insightful research, if the Bible is still used as our inspiration.

When opportunity is waiting, we hope someone will take up the chance to pursue it. Spread across Yellowstone National Park and adjacent regions is such an opportunity – a sequence of volcanic deposits with abundant fossil tree remains. There was much discussion of these fossil forests among certain groups of Christians in the 1960s and 1970s. On mountainsides, alongside living forests, were many layers of primarily volcanic breccias (debris-flows) with abundant fossilized horizontal logs and upright stumps. These appeared to be the remains of forests that grew there, were killed and buried by volcanic debris flows, followed by another forest (Fig. 1). The same cycle seemed to be repeated a minimum of 65 times. The deposit included many large trees, some with up to 1,000 annual rings, so the time involved would be considerable.[1] 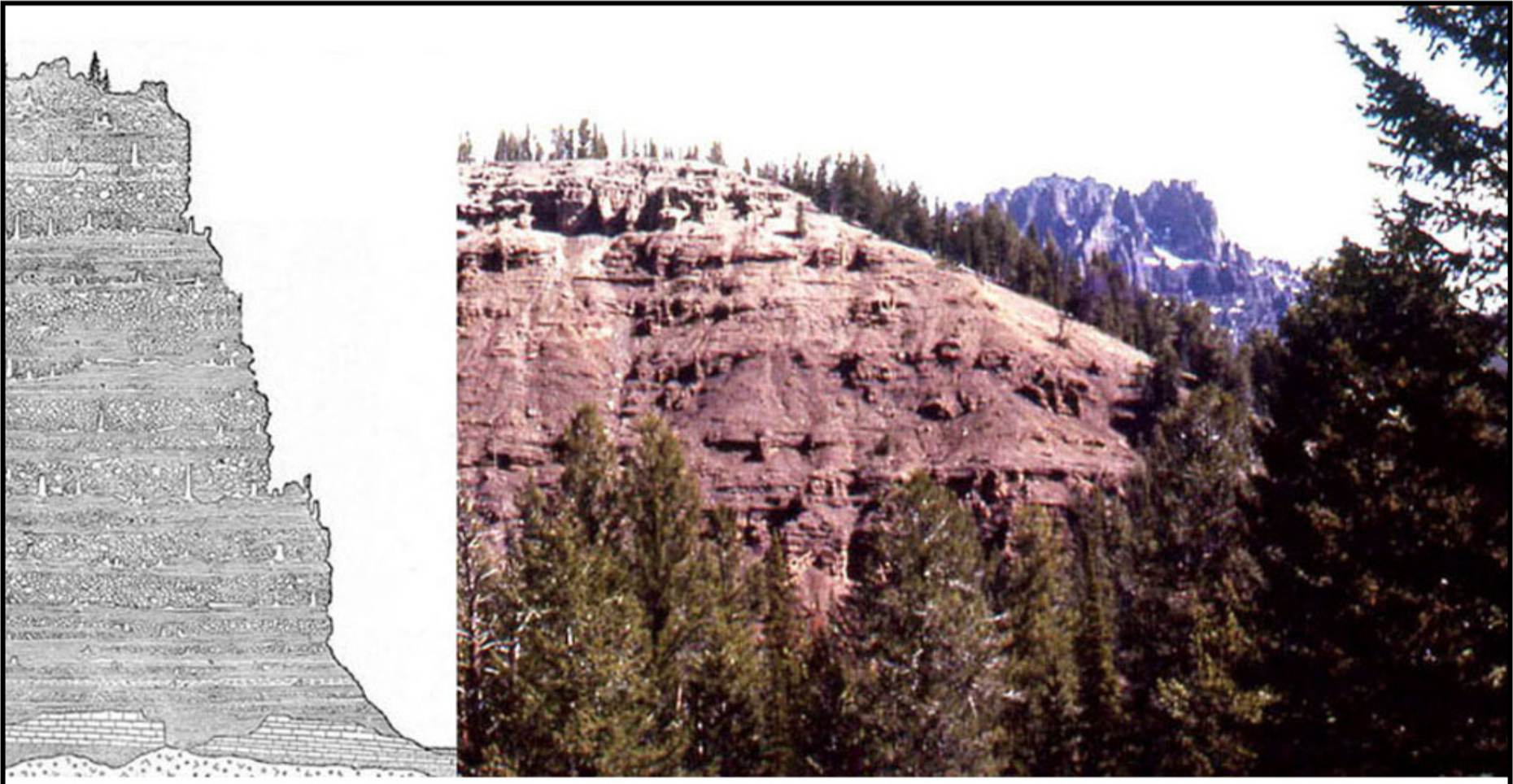 If this interpretation is correct it would take far longer to grow and accumulate the fossil forests than is compatible with a biblical time scale. This is amplified when we remember that these Eocene fossil forests came after a long series of other fossil-bearing geological formations, from Cambrian to Eocene. This was the reason for the discussion; do these fossil deposits say that the Bible is very wrong about the time since creation, or is there some mistake about the events that produced the Yellowstone fossil forests? A paper was published arguing that the forests did grow in position, and are an argument for abandoning the acceptance of the biblical time scale.[2] This publication convinced some individuals that its position was correct, but on the other hand it was also important in leading others to take up the challenge to examine the Yellowstone fossil forests more carefully.

The fossil forests did look like they grew there, one forest after the other. That is how such events happen in the modern world, and it could seem silly to question that interpretation and look for another model for formation of this series of “forests,” unless there was a very good reason to question the accepted interpretation. One possible approach is to take seriously the biblical worldview, with its predictions that seeming conflicts between physical evidence and God’s Word are actually opportunities for researchers to discover better interpretations of the evidence. Several geologists and paleontologists accepted this opportunity and launched into research on the fossil forests.[3]

The result of their work was a series of publications in professional journals that revealed contradictions between the “in growth position” or in situ explanation for the forests and the evidence, which suggested a different model for their accumulation. Much evidence pointed to the possibility that the trees grew somewhere else and were transported into the Yellowstone region and were buried by one set of volcanic debris-flows after another.[4-6]

The eruption of Mt. St. Helens in 1980, and the resulting deposit of a large raft of logs and stumps in Spirit Lake has provided support for the model of logs and stumps floating vertical in water and sinking to the bottom in that position. If there had been a series of volcanic debris-flows into Spirit Lake it appears that the logs and stumps would have been buried to make a deposit much like the Yellowstone fossil forests. Stumps carried down rivers in chaotic, fast-moving debris-flows from Mt. St. Helens even remained upright after 60 miles of transport down the mountain valleys.[7-10] Since that time the Yellowstone fossil forests have been interpreted as another example of the successful application of a biblical worldview in guiding geology researchers to a better explanation.[3], [11]

That understanding of the Yellowstone fossil forest research does seem to be justified. But is the task completed? Has the new model of transported trees been solidly supported and established? For a time the Park Service in Yellowstone took down the highway information signs describing the fossil deposits as forests that grew there. However, it does not appear that the geological community is convinced that the transport model should be taken seriously. Even for those of us who were acquainted with the research and are convinced that it was done with proper scientific care, it is not clear that the research went far enough. There is much more to be done before the opportunity for reinterpretation of the “forests” has been filled out and established as a well-supported geological explanation. This is an opportunity waiting to be accepted and fulfilled and papers published.

We will summarize the types of evidence that have been studied, at least in a preliminary way, and suggest further work that is waiting to be done.

The volcanic layers of coarse breccia contain some small rock fragments and larger fragments up to several feet in diameter. Horizontal logs are distributed through the debris-flow material.[3] Between these coarse layers there often are layers of fine volcanic ash containing fossil needles, leaves, pollen and other organic material. These are referred to as organic layers, and some researchers interpret them as soil layers. Upright fossil stumps may be resting on the organic layers, or extending down into them.

Dr. Harold Coffin described the organic layers in his articles in Origins.[3] They do not have the characteristics of soil, and show evidence of deposition of the fine ash by water. They contain well-preserved leaves and not decaying leaves as would be expected in the lower levels of a true soil. This preliminary work could be followed up by detailed study and publication in a professional research journal. Other features of the organic layers also merit much more documentation. Quantitative research is needed, examining many samples to determine how frequently different features appear in these samples. Random observations don’t tell us whether a particular feature is exceptional or uncommon, or whether it is the way things usually are.

Underneath a living forest the forest floor litter will contain needles or leaves in various stages of decay, as well as pollen. It is expected that the species of needles, broad leaves and pollen will approximately represent the tree species growing there. This will of course be influenced by several factors. Coniferous trees and also walnut and sycamore produce pollen that is carried by the wind, and pine trees especially produce prodigious amounts of wind-transported pollen. This will affect how much pollen is expected in the forest floor litter. Keeping such factors in mind, the match between tree species and needle, leaf, and pollen species can be evaluated. In the Yellowstone fossil forest there is a poor match between tree species and the litter in the organic layers.[3], [5] The large amount of pollen from pines in particular should be represented in the forest floor under them. However, in some Yellowstone layers pine pollen is severely under-represented and deciduous pollen is severely over-represented in relation to the wood species. There is also not a good match between tree species and needle and leaf species. These observations don’t seem to represent in situ forests. Trees and forest litter transported and sorted by the flowing water seems to be a better fit to the data.

In a forest one encounters wood in all stages of decay. If a forest is buried quickly by volcanic flows this may reduce the amount of decay, and thus explain the excellent preservation of wood in the Yellowstone fossil forests. However, when such a burial event occurs it should bury and preserve old logs and stumps that show partial decay. Also, upright stumps that extend up through a debris-flow, into the next forest above that flow, should show extensive decay where they were exposed during the growth of the next forest. It is common for fossil stumps in Yellowstone to extend up into the next layer, and some even go through more than one layer. These are still well-preserved, without the expected decay. Such stumps and logs are often broken and smashed at their tops or with pieces broken out of their sides.[3] In one paper this evidence was interpreted to indicate decay, but there was no study to determine if the damage was from decay or the result of damage to well-preserved trees from falling rocks.[2] The damage does not appear to represent decay, but this should be determined by microscopic study of many samples of the fossil wood.

The original paper presenting these forests as evidence as a challenge to the biblical perspective[2] presented about a dozen lines of evidence which the authors described as supporting in situ growth of the forests. However, for each of these lines of evidence they only presented a hypothesis in support of their conclusions. They did not present the types of evidence needed to test their hypothesis, in relation to other hypotheses.

The issues described above are only representative of a broader range of evidence that deserves further research.[3] Harold Coffin and his colleagues did good research, and some of these issues have already been described in quality geological research journals, like Geology, the Journal of Paleontology, Palaios, and Palaeogeography, Palaeoclimatology, Palaeoecology, but much more could be carefully studied and the results published in research journals. The research that has been published exists as individual publications in relative isolation from each other. A comprehensive case for a new model for these fossil forests is not available in professional publications. There is need for more original research and publications, and review papers to pull these different line of evidence together into a coherent model for the interpretation of the Yellowstone fossil forests that would bring it to the attention of the geological community.

As with other research topics discussed in Origins, even though our interest in such research resulted from religious questions, the research all involves testable hypotheses, testable by application of standard geological research methods. Thus it is legitimate scientific research, worthy of someone’s energy and time. Even if we were wrong about the biblical time scale, the Yellowstone fossil forests could still have resulted from transport of the sediments and trees, and burial in the Yellowstone region. These exceptional fossil deposits deserve the best in careful, open-minded hypothesis testing.

[5]Chadwick A, Yamamoto T. 1983. A paleoecological analysis of the petrified trees in the Specimen Creek area of Yellowstone National Park, Montana, U. S. A. Palaeogeography, Palaeoclimatology, Palaeoecology 45:39-48.

[10]Fritz WJ. 1980. Reinterpretation of the depositional environment of the Yellowstone “fossil
forests.” Geology 8:309-313.