Vitamin C is involved in the body functions of both man and animal. But it was long believed that man and a few exceptional animals like the monkey and guinea pig were the only ones that require the vitamin in their diet; the rest can make their own. Chickens do not require the vitamin, so presumably birds in general do not.

But careful investigation has revealed that many species of birds must get the vitamin in their diet; and of those which make their own, some make it in the kidney and some make it in the liver. When more mammals were studied, there were additional surprises. For example, all the members of one order require the vitamin.

Only now do we have sufficient knowledge of the diversity in vitamin C requirement to even begin an evaluation of the various possibilities for the origin of that diversity. Could this be true also of other characteristics of animals? Might we sometimes be too hasty in concluding that there is conflict between revealed and scientific avenues of information on origins?

No one would question that vitamin C (ascorbic acid) is of critical importance in body function. But the distinction between animals which can make their own and those which require it in the diet is only now recently becoming known.

The standard comprehensive reference on comparative physiology (Prosser 1973) states that ascorbic acid is synthesized in adequate amounts by most vertebrates, though required in the diet of man, monkeys, and guinea pig. An earlier text (Scheer 1948) listed the same mammals, and also those mammals and birds which had been shown not to require it: rat, mouse, hamster, cow, cat, dog, fox, and chicken.

In 1969 Chaudhuri and Chatterjee showed that if one group, the birds, is studied in detail, the picture becomes more complex and interesting. However, the data were partially obscured by the heavy emphasis on phylogenetic theorizing, both in the brief text and in its accompanying diagram. One species each from 11 orders was studied; 10 of these were able to synthesize ascorbic acid in the kidney, and 1 in the liver. In a 12th order (the "perching birds" that we most often see) 10 species could make the vitamin in the liver, 2 in both liver and kidney, and 16 in neither organ. Later Chatterjee (1973) and Gupta et al. (1973) tested reptiles (all in the kidney) and mammals (in the liver, in neither organ guinea pig, monkey, man, 2 bats).

In the last half of the decade three comprehensive papers on mammals appeared, all by Birney et al. (1976, 1980) and Jenness et al. (1980). They could detect the critical synthesizing enzyme for ascorbic acid in only 1 of the 34 species (6 families) of bats studied, and there only a trace was present. This deficiency is evidently not due to lack of importance of the vitamin to the animal: in the several genera of bats checked, the tissue level of the vitamin was the same as in other mammals.

How might all this diversity with respect to ascorbic acid synthesis in the vertebrates be explained? Is there evidence for a taxonomic explanation?First I arranged literature records by taxon. Then diversity was analyzed at each level, using different members of a taxon to check whether it consistently differs from other taxa at the same level: e.g., orders as replicates for each class to determine whether the vertebrate classes are alike or different; or species as replicates for each genus to determine whether genera are alike or different.

Between classes of a phylum. In fish, amphibian, and reptile classes synthesis (if it occurs at all) is by the kidney in the few representatives studied, but in two orders of birds and most orders of mammals it is by the liver. Birds and mammals differ significantly in the proportion of orders which synthesize by the kidney or by the liver (Table 1). 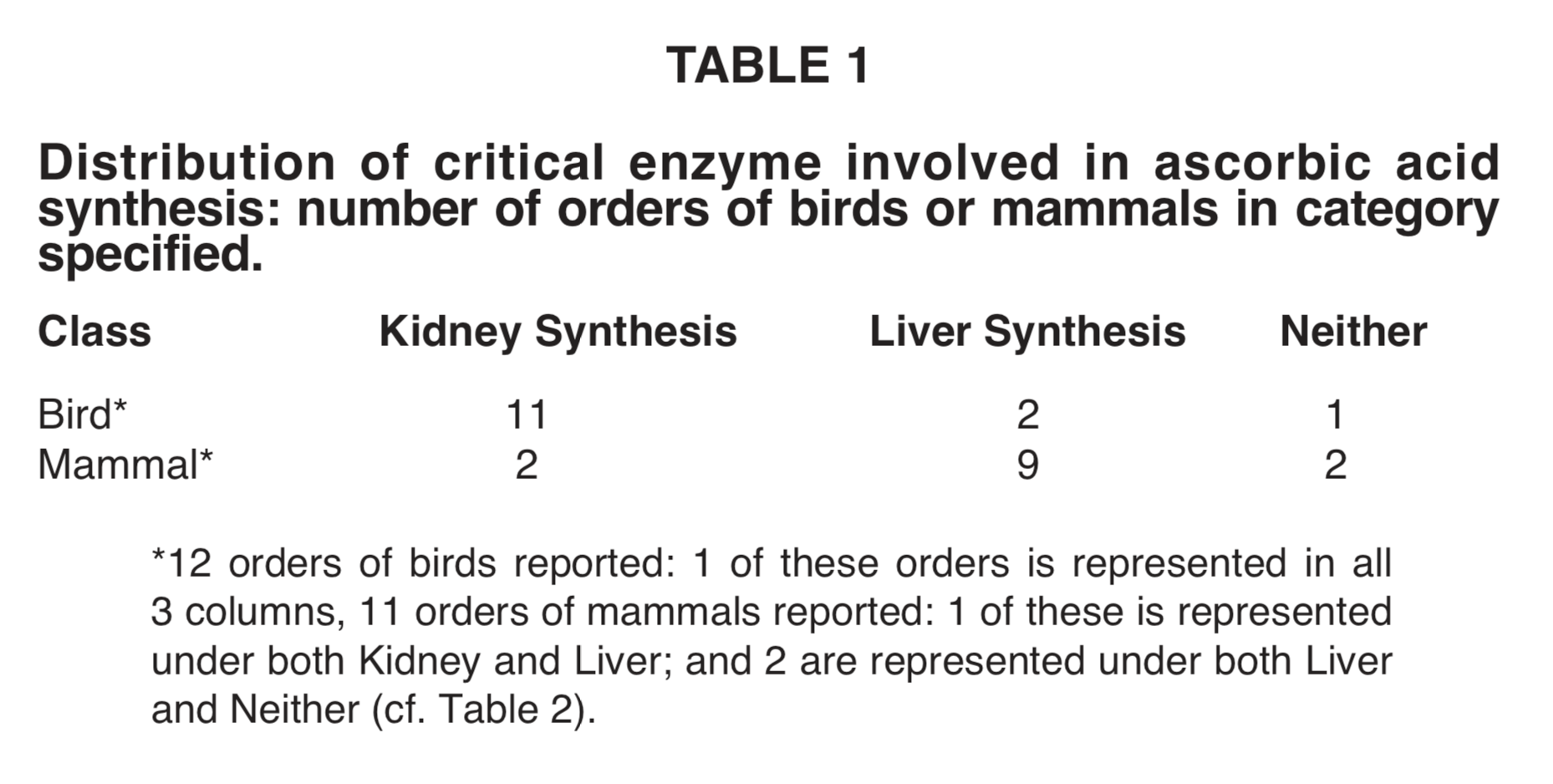 Between orders of a class.

Mammals (see Table 2). The number of species measured in Monotremata (two) is small. But each represents a different family (platypus and spiny anteater), and they are alike in being the only mammals where synthesis is by kidney alone. The two taxa sampled in the marsupial order Peramelina are alike in being the only mammals where it is by both liver and kidney. One order as a whole (Chiroptera) seems to lack synthetic ability. All the families tested (5) from one suborder of Primates lack the ability, whereas those (2) from the other suborder make the vitamin in the liver.

Birds. In the one order where many replicates have been tested, there is much diversity: 4 families make the vitamin in the liver only, 2 in both the liver and kidney, and 9 in neither. This is in marked contrast with the other 11 orders (1 or 2 species each) taken as a whole, where it is the kidney in every order but one. 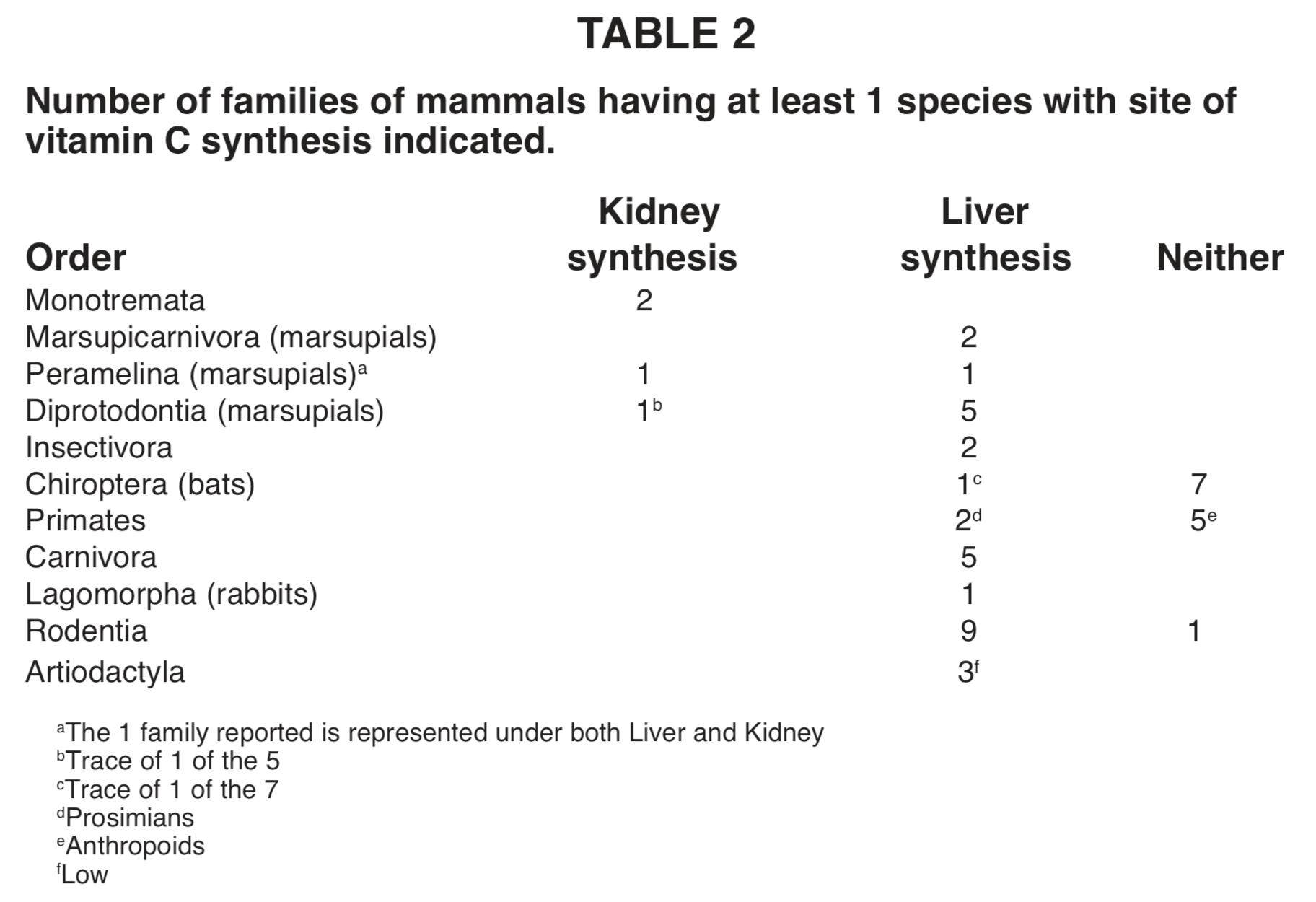 Between families of an order. In the one family of birds with records for as many as 3 genera, 1 genus can make vitamin C in both liver and kidney, but the others only in the liver. The same is true for one of the two families with 2 genera each. This suggests as much diversity within a family as within the order itself; but a multi-genus test of only 3 families is obviously inadequate. (In the other classes there appears little diversity to explain at this or the next taxonomic level).

Between genera of a family. In one family of birds there are 3 genera represented by more than 1 species each. In 2 of these genera, the species are alike in being incapable of synthesis. But in the third genus 1 of the 2 species makes the vitamin in the liver only, and 1 in both liver and kidney. Hence this basic a difference can occur within a genus. Thus the limited sample available does not demonstrate between-genus or between-family (above) diversity to be taxonomic.

Would diversity in food habit explain any of the diversity in synthetic ability? Birney et al. (1976) felt that their sample of 34 species of bats might help answer this question, especially because the bats represent groups with very different diets: fruit, pollen-nectar, blood, fish, insects. Yet all the species turned out to be alike in synthetic disability. The authors point out that one type of food known to be deficient in ascorbic acid is seeds, and no bat relies on them as its primary food.

Is this pattern produced by degenerative loss of synthetic capability? The evidence indicates that it is. For one, the distribution of deficiency is sporadic: one species (guinea pig) out of many species and families of rodents; 2 out of 7 individuals of one species of marsupial (Birney et al. 1980); and a synthetic capacity in one species of rabbit so low that the vitamin is probably a dietary requirement (Jenness et al. 1978). In the words of Hoar (1975), "loss of the enzyme concerned with ascorbic acid has evidently occurred quite frequently."

In conclusion, what has the study of many more taxa done? 1) It has greatly enriched our picture: rather than the long-held view that vitamin C is required in the diet of guinea pig, monkeys and man, we now see that it is required also by bats, at least some fish, and many birds; and on the other hand, not by all primates. Further, animals which make their own do so in different organs: the kidney, especially reptiles and birds; or the liver, especially mammals and perching birds. 2) There is evidence for a taxonomic explanation of part of the diversity between classes and between orders, but hardly data at lower taxonomic levels even to carry out a common statistical test. 3) It appears to provide more support for change by loss than by gain of capability.

Were all animals once able to make their own vitamin C? or were they all dependent on their food for it? or some of both? Would original design plus degenerative loss serve to explain the present-day diversity? In any case, we see here a current example of how more research can greatly change our understanding of diversity. This should make us slow to conclude that scientific and revealed information on origins actually conflict.