Since at least the time of William Smith – around the turn of the 19th century – as data have accrued, it has become progressively clearer that geologic strata contain an ordered arrangement of fossils. Trilobites are found in Paleozoic rocks, dinosaurs in Mesozoic rocks and humans in Cenozoic rocks.[i] Different mechanisms have been proposed to explain this order in the fossil record. The prevalent view today imposes a Darwinian understanding on the data. In this framework, the ordered sequence of fossils is commonly viewed as a record of life over immense periods of time. In reality, the data taken as a whole are unsupportive of this thesis. Here I explore “Lazarus species,” which illustrate the tenuous relationship between the data and the Darwinian view that order in the geologic column records an immense timespan during which organisms evolved and went extinct.

There are a number of assumptions inherent in the view that order in the fossil record supports Darwinism; some of these are not logical, are inconsistent with data, or possibly both. One of these is the assumption that the fossil record provides a record of life over time. Most would agree that fossils represent life that lived in the past, however, even if the fossil record formed over hundreds of millions or billions of years, this does not make it necessarily a complete record of when specific life forms were present or if certain life forms existed at all. Charles Darwin appears to have agreed with this view to at least some degree when he invoked “the extreme imperfection of the geological record”[ii] to explain the lack of intermediate links (missing links) in the fossil record.

While the fossil record preserves an amazing number and variety of organisms, it seems impossible that it could preserve a snapshot of all the life that existed at every moment throughout history. Normally a record of organisms, with the possible exception of some reef forming organisms and others of a similar nature, is not preserved when they die. If every organism that has lived over the course of history left a fossil, it seems that the Earth’s surface would be made of up nothing other than fossils. This raises the question of whether the fossil record is a representative sample of what was living at various times throughout history. How could this be tested for? If fossils of an organism were not being made, for whatever reason, in geologic strata below where fossils of an organism are first found, and the fossil record is the only record that we have, we cannot be certain whether or not an organism existed when lower strata were formed.

But there are methods that may hint at whether or not an organism existed before there are fossils of it. One method involves the use of molecular clocks. If molecular clocks tell time at all accurately, something that is very open to debate, then just about everything seems to have been alive long before it starts to show up in the fossil record.[iii] Determining the actual age of any particular kind of organism may be difficult to accurately estimate by any method, but there is a quite definitive way of testing whether the fossil record contains a reasonable sample of organisms living over the time it is commonly thought to have made a record of.

Possibly the best known Lazarus taxon are coelacanths. Coelacanth fish were thought to be missing links between fish and land-dwelling tetrapods. They disappear from the fossil record in Upper Cretaceous strata – around the same geologic level as the dinosaurs – which is thought to have been made something more than 60 million years ago.[iv] This disappearance was interpreted as an extinction event recorded in the fossil record until coelacanths were found living in waters off the east coast of Africa and in Indonesia. Clearly they were alive over the putative tens of millions of years they are thought to have been extinct; if those tens of millions of years existed at all. The only reasonable interpretation, however long the gap is between fossil and living coelacanths, is that the fossil record did not record their presence over a substantial period after they disappeared. Why assume that they did not exist before they appear as fossils in the first place?

Coelacanths were an averagely successful group of fish with easily recognized distinctive features. They first appear in Devonian strata, supposedly about 400 million years old, and are not particularly uncommon as fossils. Coelacanths’ absence in upper parts of the fossil record, in which other fish fossils are plentiful, is enigmatic. The fossil record had no trouble recording the presence of coelacanths for what is commonly thought to be roughly 340 million years, why stop making coelacanth fossils 60 million years ago? How would sediments formed over the last 60 something million years have so perfectly excluded coelacanths?

There are possible explanations. Maybe coelacanths evolved, without changing much in their morphology, into a different niche where nothing gets fossilized. Maybe the coelacanth population crashed for some reason due to changing environmental conditions and they have hung on over tens of millions of years as a very small population, unlikely to get recorded as fossils. Whatever the explanation, they illustrate the ease with which immense gaps in the record of organisms can be explained away within a Darwinian framework. Why believe coelacanths only evolved during Devonian time rather than several hundred million years before, but were not fossilized until Devonian rocks were formed? Why believe that humans or rabbits were not present when Cambrian rocks were formed just because there is no record of them? Why believe that the fossil record is a record of life over time at all? 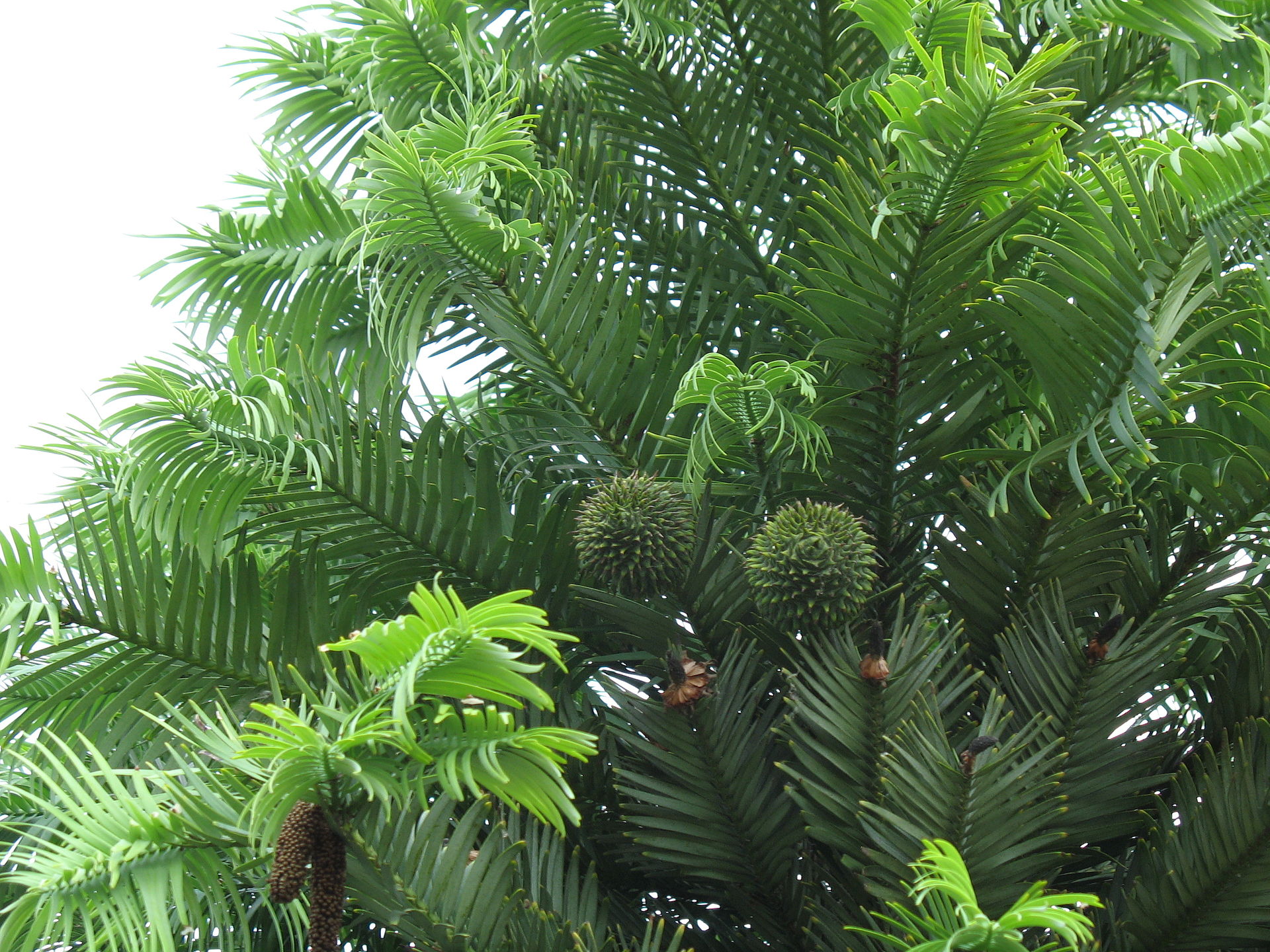 Another example of a Lazarus species is the Wollemi pine. These towering trees, first discovered as fossils, were thought to be extinct until a small stand was found during 1994 in the Wollemi National Park near Sydney, Australia.[v] The Wollemi pine fossil record is commonly reported as spanning from 90 million to about 2 million years ago. This means these trees must have lived during the putative 2 million years fossils are absent and they appeared to be extinct. Could this possibly be a correct interpretation of the evidence? Lazarus taxa clearly illustrate the fallacy of confusing absence of evidence with evidence of absence.

Possibly the most spectacular example of a Lazarus species are modest-looking mollusks called monoplacophorans. According to common interpretations of the fossil record, monoplacophorans went extinct some 320 million years ago, yet they are living deep in today’s oceans, producing the same kind of shells found in the fossil record. These organisms are particularly problematic, as they should produce a good consistent fossil record. They apparently live in the same niche as their fossil relatives, although some fossil species may have inhabited shallower habitats. Most importantly, they produce hard shells that are more likely than soft parts to be fossilized. They are not particularly uncommon fossils in Paleozoic rocks, how could they possibly have not been recorded in 320 million years worth of sediment? It is worth noting that some fossil taxa, such as the brachiopod Lingula, appear in the fossil record in about the same geologic strata as monoplacophorans and have a fossil record that goes all the way through to the top. We find them living today. Lingula has a shell, but not a hard shell like monoplacophorans.

Lazarus species raise questions about how the geologic column formed. If organisms can disappear from the fossil record and yet still be living, how can we be sure that they were not alive long before fossils of them first formed? As Bible-believers, we don’t embrace the idea that life has been suffering and dying for millions of years. Lazarus species are one good reason that we should be thinking about mechanisms other than deep time to account for the order we observe in the fossil record. It is true; some data are well explained by invoking deep time. Of course, just about any theory explains SOME data; the trick is to elegantly explain ALL the data. It is also true that, while evidence requiring heroic explanations to maintain interpretations based on “deep time” accrues, Bible-believers also lack glib explanations for some data. However, we do have faith in a logically sufficient cause for what is observed in the creation and a historical record of the Creator’s action in nature.

[i] Where exceptions are noted, they can generally be well explained in terms of transport of some kind in which fossils from one layer are eroded out and become constituents of layers that are formed subsequently.

[ii] Darwin CR. 1859. On the Origin of Species by Means of Natural Selection, or the Preservation of Favoured Races in the Struggle For Life. 1st Edition. John Murray, London. Pg 280.

[iii] Obviously, molecular clocks are unlikely to underestimate the age of a taxon given the fact that they are calibrated based, at least in part, on fossils and it would be very hard to get a paper published claiming a taxon is younger than its oldest discovered fossil. For a discussion of this phenomenon relating to placental mammals, see http://www.the-scientist.com/?articles.view/articleNo/38858/title/Clocks-Versus-Rocks/ and http://www.evolutionnews.org/2014/01/clocks_versus_r081291.html

[iv] Note that fossil coelacanths are not identical to those living today. In fact the fossil record of coelacanths is like many other groups with greater diversity in the past than at present.