This reflection is posted in occasion of Creation Sabbath, recurring on 28 October 2017. For more information about this event, visit creationsabbath.net
If you like this blog post and would like to use it as a sermon, you can download a sermon version here and the accompanying Powerpoint here

On October 31, 2017, Protestant Christendom will celebrate one of the greatest events in Christian history. October 31 will mark 500 years since Martin Luther strode through the crisp autumn air of Wittenberg’s streets, making his way toward the Castle Church. Clutched in his hand were nails, a hammer and a revolutionary document. Arriving at the Church’s large wooden doors, Luther nailed up the document we now call, “The Ninety-Five Theses.” 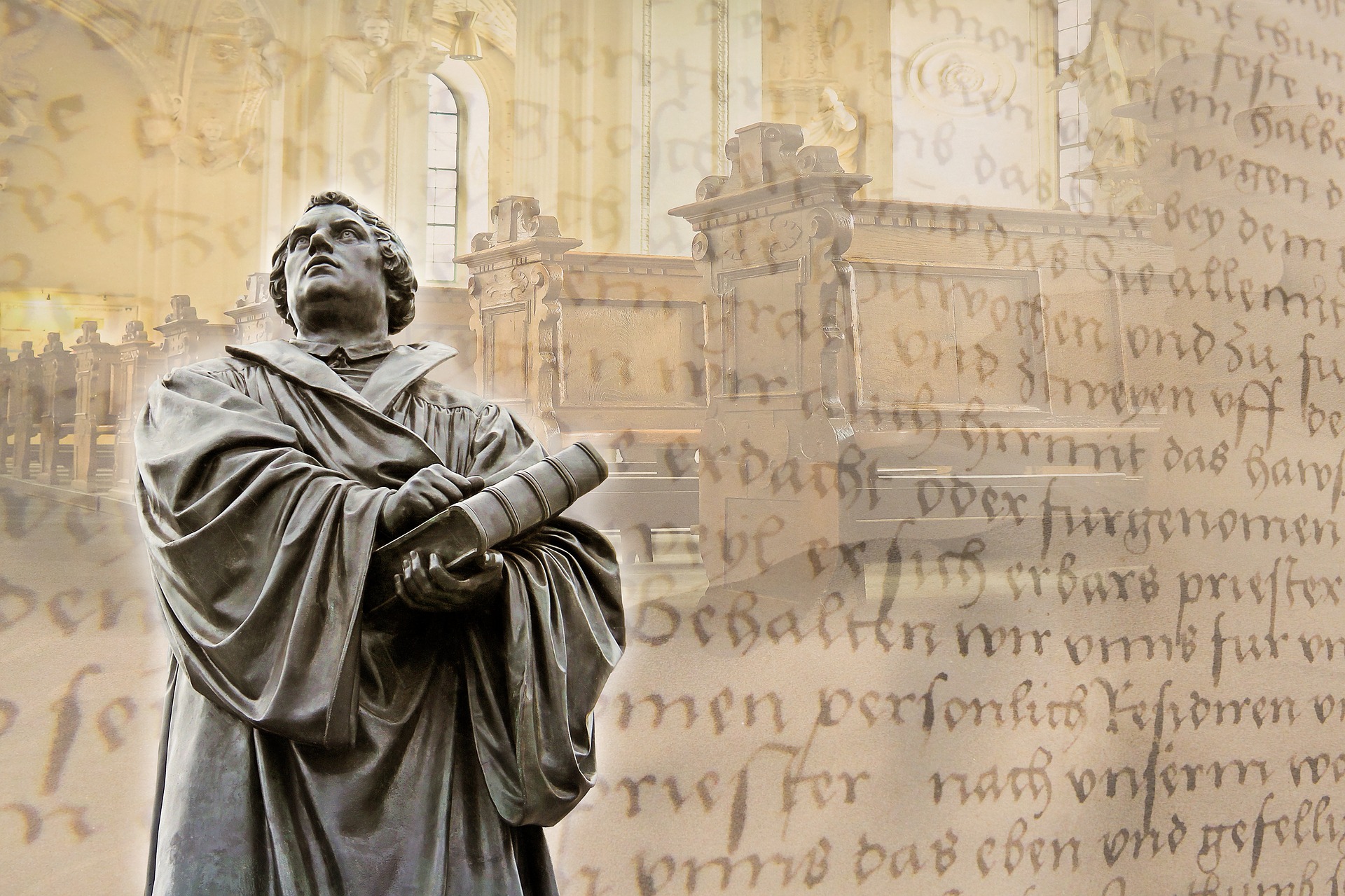 Without the ideas expressed in Luther’s 95-Theses, we would not be celebrating Creation Sabbath this week. I want to draw your attention to just two of the 95-Theses. In the 27th thesis, Luther quotes a catch phrase used by those selling papal indulgences:

The 95-Theses were a response to the sale of Papal indulgences that were being sold to finance the building of St. Peter’s Basilica in the Vatican. Customers were assured that these indulgences had the power to liberate souls from purgatory, sending them straight to Heaven.

To counter this evil scam, Luther appealed to something that had become far removed from the life of the average Christian—God’s Word. There is nothing at all in the Bible about paying for indulgences, salvation is by God’s grace, a free gift!

Returning the source of authority in Christianity from the Pope to the Bible led to a restoration of the doctrines central to biblical Christianity. The Bible in the hands of believers lead by the Holy Spirit powered the Protestant Reformation and it is the power of God’s Word that sustains the Church today. Protestant Christians embrace Luther’s famous Latin dictum “Sola Scriptura.” It is God’s Word alone that has authority, not tradition, not what we think, not what some “expert” thinks. The Bible and the Bible alone forms the foundation of Protestant Christian beliefs, understanding of the world and hope for the future.

The second thesis we will look at is Luther’s 62nd:

“The true treasure of the church is the most holy gospel of the glory and grace of God.”
“Der wahre Schatz der Kirche ist das allerheiligste Evangelium von der Herrlichkeit und Gnade Gottes.”

What is this “true treasure of the Church” that Luther talked about? It is something that is explicitly denied by many in the world in which we live. The claim is made that humans are exclusively the product of our environment and genetics. If we do evil things, it is not our fault, it is just the way we are. Our lusts, our inclinations, our desires and ultimately our actions are beyond our control, so we cannot be judged in any way for them because we cannot change ourselves.

But Jesus Christ, our Creator, rejected this way of thinking:

“Most assuredly, I say to you, whoever commits sin is a slave of sin. And a slave does not abide in the house forever, but a son abides forever. Therefore if the Son makes you free, you shall be free indeed.” John 8:34-36 NKJV

We may not be able to change ourselves, but our Creator, if we let Him, can change us! It is worth considering the context of this text. Those who were confronting Jesus claimed to be heirs of Abraham and never slaves to anyone. This was after Jesus had told them that “the truth shall make you free” (John 8:32 NKJV).

The Jews of that time were filled with pride and blinded to their pitiful sinful state. Jesus, “the way, the truth, and the life” (John 14:6 NKJV) stood before them offering them true liberation, something totally transforming. He could do that because “All things were made through Him, and without Him nothing was made that was made” (John 1:3 NKJV). Human beings are not products of a cold uncaring universe, subject to whatever chance way we happened to turn out. Humans, and all of nature, are creations of the God who “is love” (1 John 4:8 NKJV).

God, the Creator of Heaven and Earth came down and was with us, and He is with us now, in every heart that is open to Him. Our Father, Our Creator has not abandoned us, He has adopted us! Just as Adam was His son, through Jesus Christ and unspeakable grace, we are a new creation, born again as His children. No wonder the Apostle John exclaimed:

"Behold, what manner of love the Father hath bestowed upon us, that we should be called the sons of God." John 3:1 KJV

How can we explain this? Isn’t the Gospel incomprehensibly good? Because God is our Creator, of course He can and will make us a new creation (2 Corinthians 5:17). This logic of salvation cannot be improved upon and is fundamental to the Christian understanding of human nature, the world and all of reality. No wonder Martin Luther was so firm and clear as he championed of the biblical creation as it is recorded in Scripture. To abandon the reality of creation is to abandon reality itself, including the reality of salvation. Luther would tolerate none of that. Because he understood the infinite value and Truth of Scripture, he wrote:

“When Moses writes that God created heaven and earth and whatever is in them in six days, then let this period continue to have been six days, and do not venture to devise any comment according to which six days were one day. But, if you cannot understand how this could have been done in six days, then grant the Holy Spirit the honor of being more learned than you are. For you are to deal with Scripture in such a way that you bear in mind that God Himself says what is written. But since God is speaking, it is not fitting for you wantonly to turn His word in the direction you wish to go.”
(What Luther Says. A Practical In-Home Anthology for the Active Christian. Compiled by Ewald M. Plass. St. Louis, Missouri: Concordia 1959. p 1523.)

Luther was probably more concerned about people who wished to claim that the creation occurred in a single instant rather than over six days, as the Bible records. Today there are those who wish to deny the creation all together, or stretch it out of eons of suffering death and struggle for survival.

What is wrong with the Biblical account? Nothing, it is true, it makes sense and ultimately is central to the Gospel. Our Creator has already demonstrated that He can create us, and the creation of our Earthly father, Adam, was not the result of any works of his own. Adam’s creation was and our creation is an act of pure grace on God’s part. How evil it would be to twist the creation into a Darwinian struggle for survival in which, through the works of our dead ancestors, we have come to the glorious state we enjoy today! What kind of gospel would it be that offers us a perfect body, mind and soul through a million future deaths as we evolve to perfection? Where is the grace in that?

Ultimately, the creation was a fundamental pillar of the Reformation because it is a fundamental theme of Scripture and fundamental to the Gospel. No wonder the first article of Martin Luther’s short and long catechisms is: